Day 2: As we are doing a block schedule, today was the first day I met my final three classes. On the positive side, we listened to “Waterloo Sunset” by The Kinks, perused its lyrics, and in a discussion of persona, elaborated theories about urban alienation, loneliness, agoraphobia, voyeurism, irony, and Englishness (by the way, the kids did the elaborating). What’s not to love about that?

Day 3: Two stellar literacy seminar classes (we “tasted” books, discussed what makes good reading, and got to know each other better) led one of my students, a transfer from Rock Bridge, to ask about our radio station. I suggested he stop by, and he showed up pretty immediately; they usually take a while to arrive. We jammed out to Kurtis Blow’s “The Breaks” and Biz Markie’s “Pickin’ Boogers,” the first his request, the second my “answer.” He is coming back tomorrow. 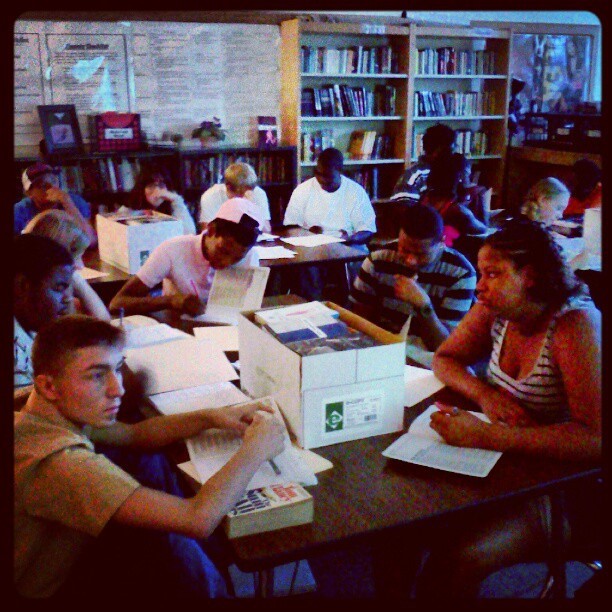 “A” Day, 1st block Lit Seminar: supposed to be small, but you can’t even see a third of the students who were actually present for the photo.

Day 4: Got an opportunity to sell Ulysses, Project Nim, Serengeti, Built to Spill, the “big-little” law of capitalizing titles, and The White Tiger. Got an opportunity to start over with a kid I referred to the principal’s office on Day 2 (first-ever first-day referral, couldn’t be avoided, neither of us were at our most stellar, though) and we got along great, gabbing about The Hunger Games and Black Like Me. Put about 25-30 quality independent reading books in kids’ hands. Victory–not Pyrrhic ones, which are our defining kind. Thank you, Teaching Gods, for managing my professional manic depressive state….

Day 5: 20+ kids showed up for our first True/False Film Fest Youth Brigade club meeting of the year, including a bevy of sophomores! First meeting of last year: more teachers than students, and less than 10 total people! THAT’S progress. Thanks, Tracy Lane, for bringing passes, and Aaron Bressman, kudos for airing your grievances with the Westboro dolts. Congrats, Adriana Cristal, for being the first-ever Youth Brigade Homecoming Queen nominee. OK, that is all.

Day 6: A) Received an e-mail from a Hallsville student asking how she could start a hip-hop dance club at her school and how she could find a sponsor (!?). All-time most amusing school e-mail ever.  In demonstrating “making connections” to my Brit Lit class in our study of Angela’s Ashes, I shared my kindergarten experiences of getting caught looking up a girl’s dress (HEY! I WAS 6!) and having my face forced into the teacher’s lower left-hand drawer–which was full of panties. I thought she was a child-killer for years until my kindergarten-teaching mom explained the very benign truth….

Day 7: I engaged in a lively debate about the true nature and spirit of punk with a former student, my esteemed co-sponsor Brock Boland, and our stellar intern Patrick D. King. I mostly listened. In general what emerged is “punk” can’t become just another straitjacket or boys’ club. This is not new information, but it’s always valuable to revisit it through logical discussion. We also played the music of Natural Child, dreamed of what we hope will be that band’s future visit to Columbia, and discussed a mysterious Hickman phenom. That was just lunch! Oh…TGIFF.

Day 7.5: I am extraordinarily grateful that my career has given me such opportunities as last night’s–sharing a table at a local music club (The Blue Note) with my wife of twenty years, three extremely bright former students (two college grads and one to-be), one extremely bright current student, and one Hickman grad I never got to teach but whom I’ve known personally and talked American music with since he was 12, watching together one of the nation’s most compelling and unique performers (Serengeti) showcase his songs in front of a mostly uncomprehending crowd, being able to have an insightful conversation with them about the performance and audience afterwards, and getting to meet the man himself. I thank my youthful friends for not minding being in the company of an old fart like myself.

Day 8: The son of a former student shows up at the first Academy of Rock meeting. He is the only one among nearly 30 who knows who George Jones is. That is both awesome and sad. Also, I attempt to stimulate my students into writing interesting memoirs and college app essays by sharing some of my own 6th-through-12th grade experiences, like the time my sixth grade teacher contradicted our textbook reading by telling us MLK was a Communist and an enemy of America. I’ve never trusted authority since–thanks, Mr. Lawhon!

Day 9: A generally quiet day, but fruitful–a nice discussion on the Jena 6 case with my Da literacy kids to exercise their questioning skills, a dedicated effort to grade 45 sets of lit seminar comp book entries and 31 Brit Lit “personal statement” posts to our on-line platform (so far), a gradual turning over of the mixing board to student DJs, and…there’s the bell…

Day 10: For a day where I taught three 95-minute classes, attended three meetings, and wolfed down a 22-minute lunch, I really had a blast–I witnessed Ginny Mathews Lennon’s Gay-Straight Alliance club nominate its Homecoming Queen candidate, stood amazed as my Brit Lit students thoroughly explored the implications of the opening of Angela’s Ashes, was catapulted into a state of literally weeping hilarity by a George Frissell anecdote involving a subconscious name-checking of Jeffrey Dahmer, oversaw my notorious last-block lit seminar kids really take their reading seriously, and got to finish the day by giving a talk to Mr. Frissell’s and Nicole Overeem’s Amnesty International Club about the Pussy Riot case (with side trips to Little Richard, Plastic People of the Universe, and Bikini Kill). Isn’t David H. Hickman High School – Home of the Kewpies great? Now–the whipped cream with a cherry on top…Back to School Night, and five seven-minute syllabus thrill rides across 90 minutes!