Anyone who knows George knows he is influential. However, few know that he pioneered cargo pants/shorts as traditional (i. e., daily) men’s wear for the chronologically gifted, and when on the way out the door to pick him up I noticed I, too, was showcasing many, many pockets, I chose to deny my slow decay and changed into jeans. Not all influences are positive….

This week, we headed to Midway on a recommendation from a mutual former student, the lovely and peculiar John Grupe. Once inside the cafe, I counted the calendars. Readers of William Least Heat Moon’s “Blue Highways” may remember that Moon argues that the excellence of a blue highway diner can be measured by the number of calendars on its walls. If my deteriorating memory serves, he writes about a seven-calendar cafe; I’ve never seen more than three in one, and that’s the number we counted this morning. Three = powerfully good dining.

George ordered the Perche Skillet Special (eggs sunny side up, hash browns, sausage, sautéed green peppers and a half-order of b&g), though those who imagine Frissell a beacon of economy should note he left his b&g for the garbage-gut (aka me) to “help” with. In the arena of things humans are drawn to as moth to flame, I admit a helplessness before a plate of corned beef, but the C. B. Skillet* set me free (to borrow a phrase from our fellow retired teacher and curmudgeon Michael). Perche Creek Cafe: 10. The pies and pork loin are reputedly their specialty, and we’ll return to gobble those.

Miracle of miracles, the server who rang us out and the cafe’s proprietor both had kids who went to Hickman, and none (!!!) suffered one or the other of us as teachers. They are consequently leading blissful lives.

We headed back down I-70 recounting the sweeping changes we’d seen in our lives, but the sun was coming up, not going down. 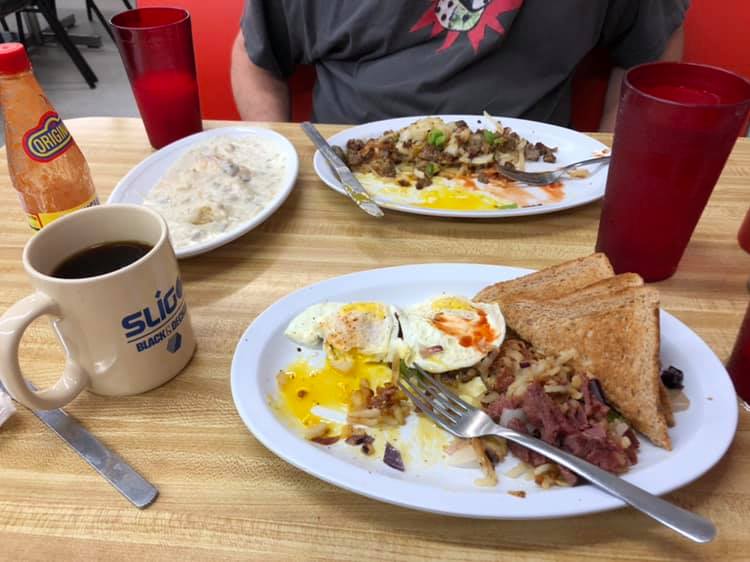 *I prefer HASH, but I’ll gladly wolf down SOS-style c. b. fragments!