Note: This entry appeared in slightly different form on Facebook, where I could tag ‘n’ challenge.

To mark our struggle through this first “month” (for some, it’s been longer; others, shorter), I’m laying down a challenge to my brothers and sisters who read, watch, and listen with style: foremost in my mind are Nicole, Rex, Charles, Sadie, Isaac, Joe, John, Josh, Ken, Clifford, Paul, Alex, Susie, Peter, Zac, Kevin, Liz, and Vance. Here it is:

On your Facebook wall, post images of the book, record, and movie/series/show/episode that have made this mess most bearable. If you’d like to succinctly explain your choices, I’d be interested (tag me), but you don’t have to. Also, challenge a friend of your own. You can copy and paste this paragraph if it helps! 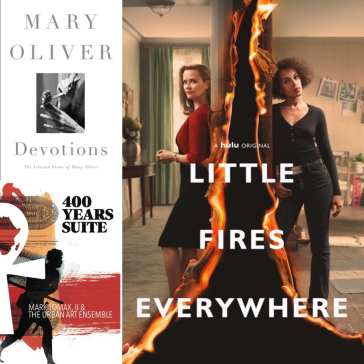 Book: I’d only read a few of Mary Oliver’s poems going into March and I’d loved each of them. I’d heard she’d run with John Waters’ crowd in Provincetown in the ’60s, and that also recommended her. But neither prepared me for the consistent brilliance, power, vividness and truth of the whole of her best work. Devotions, over 400 pages, constantly kept me engaged with the miraculous in this world, despite our troubles. Runner-Up: Sasha Geffen, Glitter Up the Dark.

Record: Dr. Mark Lomax II is a scholar, teacher and master drummer from Columbus, Ohio. His work not only celebrates Afrikan culture, tradition and styles, but also seeks to connect us, through music, to the thoughts, feelings, and practices that can deepen our humanity. His Friday lunchtime sessions on YouTube can seriously improve your day. The 400 Years Suite, a distillation of his eight-disc masterpiece 400: An Afrikan Epic, has truly energized me. Runners-up: Bowie’s Berlin albums.

Series: I approached Hulu’s adaptation of Celeste Ng’s novel Little Fires Everywhere, with skepticism; in fact, I was really only wanting to watch it because my lit-crush Attica Locke was involved. It turns out that the performances, fromthe two stars but even more so from the youthful actors, are terrific, and Ng’s vision of the connections between privilege, corrupted good social intentions, and the American racial and class divides is communicated intact. Episode 7 ( of 8 )was a streaming TV landmark. Runner-up: Better Call Saul.

Have fun with this, spread the greatness, and stay safe.

Streaming for Shut-Ins: less than a half-hour of country classics.